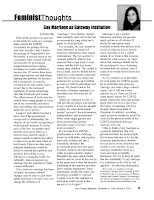 With all the ground won and lost in the battle for same-sex marriage, many among the LGBTQ community are getting riled up. And why shouldn’t they? Before the passage of Proposition 8 last November, it seemed many in our community were content with the fact that the US government granted heterosexual couples privileges not made available to anyone else. Of course there have been organizations and individuals fighting this problem for decades, but a resurgence of sorts has occurred in the last couple years—in part due to the increased popularity of social networking sites like Facebook and Twitter. The effectiveness of such tools has caused more young people to come out of the woodwork and utilize their networking and organizational skills like never before.

I support such efforts because I know that if the government recognized my relationship, the chances of my family recognizing it would greatly increase. If, in the eyes of the law, my partner and I had the exact same status as a heterosexual married couple, I suspect people would be less likely to stare at us on the train when we hold hands. I know too that many religious institutions would be forced to rethink their policies and question their ability to stay relevant in a changing world. So culturally, state-recognized gay marriage has the potential to make a major difference.

After same-sex marriage has been accepted, necessary cultural changes may be able to gain more public legitimacy because once you change the definition of “marriage,” you redefine “family” and eventually other terms that our government has long relied on to guide its social policies.

For example, the state should be more interested in matters of economic dependence than sexual relationships. The two seemed to coincide perfectly when it was expected that a man work to earn money and his wife stay home raising their children. This model is not accurate, and we should not be confined to old patterns—especially when they create very dangerous positions for women and children as well as LGBTQ individuals and groups. We should look at the diversity of human experience for structures that will work for all citizens.

When gay marriage arrives, it will provide privileges and benefits to gay couples as it has for straight couples, but what about single people? asexuals? the polyamorous, transgendered, and transsexuals? What about single parents and those representing familial structures many of us have yet to even recognize?

If a woman lives with her grandmother or with a life-long friend (or with both), and together they raise children and run a household, shouldn’t the government grant them the same hospital visitation and inheritance rights it grants married couples? Shouldn’t the state enable health benefits and tax relief to this family in the same way it does for families consisting of two parents and their DNA-sharing dependents? Most importantly, should the rights and privileges available to married couples even be the standard we attempt to work toward in the pursuit of civil rights?

Marriage is not a perfect institution and does not provide equal options to all citizens. It should be one option made available to those who believe in its social or religious power, but for many, marriage is not a viable option. If we believe that America should be a fair society, we must admit that marriage should not be the government’s way of playing favorites with its citizens—even if many of us would benefit from that structure.

As we continue on in the battle for civil rights for LGBTQ people, let us remember that same-sex marriage can make a huge cultural impact, but it will not ensure equality for all. There are far too many unsafe spaces for LGBTQ people (especially trans and genderqueer folks) for us to expect that the option of marriage will have brought about some kind of liberation. In addition, providing equal access to healthcare would do more for the physical needs of the LGBTQ population than gay marriage ever can.

I like to think of gay marriage as a gateway institution that will provide real help for some people, but its main function is to take the American population to another level in terms of the structures and models it can consider. As gay marriage establishes itself as a more and more acceptable institution, let’s try to keep in mind that the availability of gay marriage is a milestone in the road to real equality—not the final destination.

Erica Chu is a student at Loyola University Chicago and is seeking a PhD in English with a concentration in Women Studies and Gender Studies. She manages the blog keepingitqueer.blogspot.com and can be reached at ericachu@msn.com.