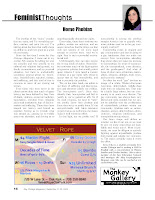 Since I can't figure out how to post a PDF file, here's an image of my article.

The phobias of the “homo” population are many, and I’m not talking spiders, roaches, and mice (oh my). I’m talking about the fears that really shape us, define us, and even grant us a sense of community.

Since the last time I wrote for GCM, I came out to my mother. My reasons for telling her now are complex and very specific to my cultural and religious background, my family circumstances, and my personal situation, but there is undoubtedly something general about my experience. I fear(ed) pain, rejection, change, and suffering, and this kind of fear is common to many of our coming out stories.

Even those who were never in the closet cannot deny that much of queer history has been defined by fear. Fear of death, violence, economic hardship, humiliation, rejection from religious and social institutions: fear of discrimination and suffering. These fears have shaped our history and bound us together, forcing us to provide what was denied us, causing us to boldly assert our identities, and driving us to unapologetically demand our rights.

Even today, these fears motivate our politics, sustain our activism, and we assure ourselves that the things we fear will not happen if we work hard enough to prevent them. And we’re right. . . . Fear is such a powerful motivational tool.

Unfortunately, fear can also inspire the wrong kinds of action. Homophobia motivates much of the fight against progressive policies that would protect queer citizens. I once heard a counter protester at a gay rights rally refuse to accept that he was homophobic, and that is precisely the problem.

We, on the other hand, can admit to our fears of suffering and discrimination and therefore justify our politics. The homophobic can’t. Once they identify their homophobia and fail to justify it, we’ve gained an ally. So if we want progress, we have to “help” the phobic know their phobias and force them to try to justify them. It’s an uncomfortable and labor-intensive project, but as we well know, the stakes make it well worth the effort.

In this light, are we phobic too? If homophobia is among the phobias straight America has to grapple with, what phobias must we in the gay community confront?

Transphobia exists in straight and gay communities (and just as going to a gay hairdresser does not make one exempt from homophobia, attending drag shows does not make one immune to transphobia). So what of transsexuals, the transgendered, cross dressers, and the genderqueer? And what of those of other races, ethnicities, nationalities, religions, abilities, body types, and economic statuses?

So often the word “gay” invokes an image of a white, Western-European American, able-bodied, middle-class male with no religious ties. That may be a fairly large subset, but our community is so much more diverse. The gay community has always been very liberal and open-minded, but we cannot be satisfied with the proliferation of unjustifiable phobias within our community (phobias such as racism, classism, sexism, able-bodiedism, ethnocentrism, religious intolerance, and transphobia among others).

Our fears shape and define us whether we like it our not, so we must be sure we know which fears are justifiable and which aren’t. Most importantly, we must be diligent in actively fighting against unjustifiable phobias both inside and outside our community. The stakes certainly make it worth the effort.


Erica Chu is a student at Loyola University Chicago and is seeking a PhD in English with a concentration in Women Studies and Gender Studies. She is also a member of the Gay Liberation Network and manages the blog keepingitqueer.blogspot.com. She can be reached at ericachu@msn.com.